51 Shades of Brown, (BONUS) Excerpt #12 [Chapter 58]
The clamoring nouveau-riche Mumbai crowd, largely composed of women with rumbling ovaries in the midst of their sexual peak, grew more anxious as the sound of the wheels rolling across the marble tile floor became louder.

The dining cart emerged from the kitchen through the double doors, as Sri-Sheshadariprativadibayankaram lay supine on the carrier table with freshly-prepared warm pakoras arranged all over his nude body, and with two chutney sauce bowls neatly tucked in between his powerful thighs. The delighted crowd of eager females immediately swarmed his body and grasped at the fried vegetable morsels served on the heroic national specimen. 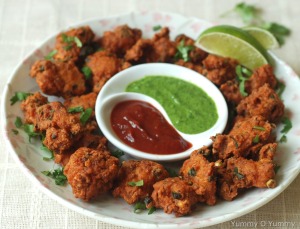 Anandamayiranjanasanjushree was forced to wait at the periphery and bite her clenched fist in eager anticipation. As she finally approached Sri-Sheshadariprativadibayankaram, she appreciated the intimate contours of his glistening body. Among various crevasses & recesses below his thick tufts of body hair, pools of vegetable oil from the pakoras mixed with his own trademark coconut oil, which had been applied to his body beforehand. Pieces of onion and fried batter adhered to his magnificent mustache. His mocha-colored skin was nearly reflective, and she could see that she stood paralyzed with her jaw agape.

Anandamayiranjanasanjushree had been charged with the task of retrieving a half dozen pakoras for her table — by this time, the precise number remaining, meticulously arranged in his pubic area, the only shield from the muggy Mumbai air and from the prying eyes of the remaining crowd.

The appetizers beckoned her.

They were a beacon of desire.

She was caught off guard by his piercing eye contact and wry smile, as the Brown Knight whispered “Virōdh na karo. Mujhe patha he tumhe pakōṛē chahiē, aur uske sath mehinge amool thofe chahiē.” [“Don’t resist. I know you want the pakoras, and the abundant bounty which accompanies them.”].

Anandamayiranjanasanjushree reached for the oily treats, but she paused as she became startled by the sudden rising of the last bastion of pakoras, like a volcano poised to erupt. Yet her quivering hand would not stop. Nay, it could not be deterred, as it extended toward the soaring mound, while pakoras began to cascade downward like tumbling boulders falling towards the thick forest during a landslide in the Himalayan foothills…